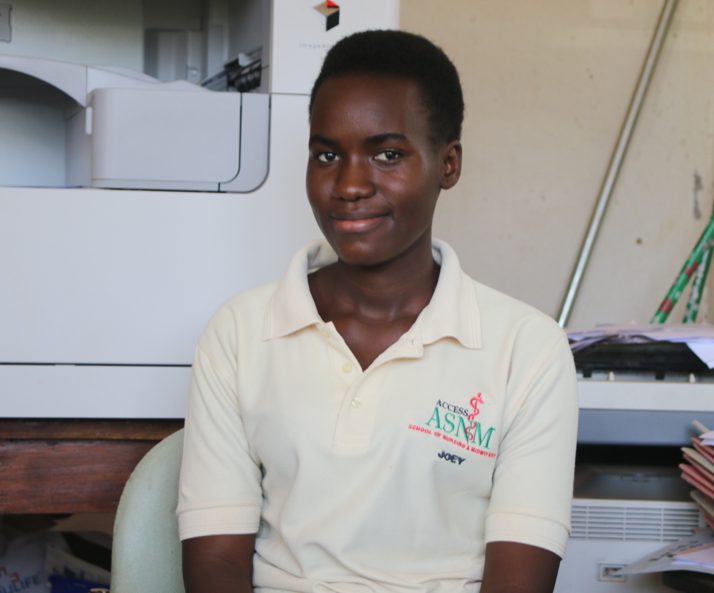 Nakiyana Jovia was born in Nakaseke district 21 years ago to the late Mr. and Mrs. Katongole. Her father was a plumber by profession and a businessman as well as a livestock farmer. Jovia and her three siblings went to good schools as the financial situation at home was generally good. However, in 2015, when Jovia was just 14 years old, her father passed away. The family was left in the care of their big brother, who was also a livestock farmer and a businessman. He took care of the whole family, including their mother. Unfortunately, Jovia’s mother also later passed away in 2019 leaving her a total orphan at the age of 18 years. With the support of her brother, she joined ACCESS School of Nursing and Midwifery in July 2019, in order to pursue her dream of becoming a midwife. She is currently pursuing a course in Midwifery and is in Year III, Semester I. Jovia enjoys all her lectures but most of all the practicum at Nakaseke Hospital and Life Care Clinic. “It makes me feel like a real midwife already!” she says. She, however, narrated a time towards the end of last year (2021), when she lost her benefactor (big brother) and worried about who would pay her tuition. She was so miserable and wondered whether she would complete her course and become somebody in life. God however answered her prayers and she qualified for a scholarship from the ACCESS- EKFS – Balamu project who are now paying her tuition along with two other students. She thanks the ACCESS-EKFS – Balamu team for having made it possible for her to achieve her dream.

She is very happy for having been given this scholarship and says that after her graduation, she will volunteer at the ACCESS Life Care Clinic as a midwife as a way of showing her gratitude to the organization.